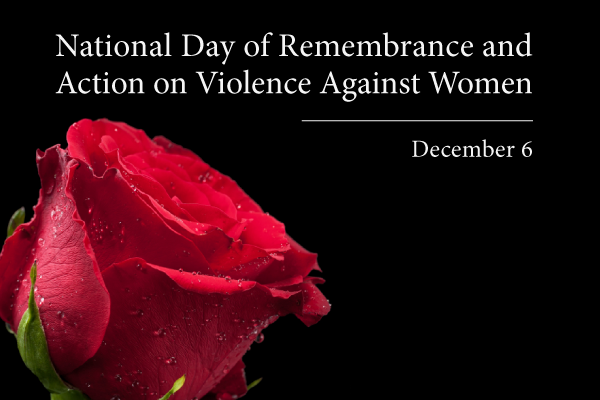 December 6 is the National Day of Remembrance and Action on Violence against Women in Canada.

Established in 1991 by the Parliament of Canada, this day marks the anniversary of the murders in 1989 of 14 young women at l’École Polytechnique de Montréal. They died because they were women.

Canadian flags on all federal buildings – including the Peace Tower on Parliament Hill in Ottawa, Ontario – are flown at half-mast on December 6. Canadians are encouraged to observe a minute of silence on December 6 and to wear a white ribbon (or a purple ribbon) as a commitment to end violence against women.

As well as commemorating the 14 young women whose lives ended in an act of gender-based violence that shocked the nation, December 6 represents an opportunity for Canadians to reflect on the phenomenon of violence against women in our society. It is also an opportunity to consider the women and girls for whom violence is a daily reality, and to remember those who have died as a result of gender-based violence. And finally, it is a day on which communities can consider concrete actions to eliminate all forms of violence against women and girls.

November and December are important months for raising awareness of gender-based violence in Canada and around the world. In addition to the National Day of Remembrance and Action on Violence Against Women on December 6, the International Day for the Elimination of Violence Against Women takes place on November 25 and marks the first day of the 16 Days of Activism Against Gender-Based Violence, which ends on December 10, with International Human Rights Day.​